The Official Dairy Queen Flavors of Summer Are Here 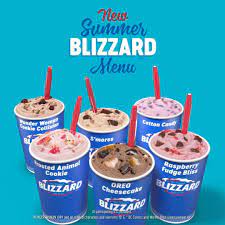 DQ announced its summer blizzard flavors for 2021. Get them while it's hot.

The official 2021 Dairy Queen summer flavors have been chosen and are ready to face the ferocious heat of the season. With only summer allowance money in your pocket, it is absolutely necessary to know the best Blizzard for your lawn-mowing made buck.

Luckily, I got the opportunity to make my way over to my local Dairy Queen to try three out of the six: Frosted Animal Cookie, Girl Scout Thin Mint, and Nestle Drumstick. Each one I ordered I got in a mini size for $2.99 and the opportunity for extra toppings for just 70¢.

Growing up, frosted animal cookies were not only a delicacy in a Keeler family lunch box, but also a staple around the holiday season. The thought of combining these immaculate cookies into nationally known Dairy Queen vanilla soft serve was unimaginable and simply mouth-watering.

Let down, the combo was too sweet. Not only were the cookies mashed in, but two pumps of pink frosting were as well! The cookies, on a happy note, maintained their crisp and did not get soggy in the ice cream. The color was a beautiful light pink and included the surprise of rainbow sprinkles here and there from the cookies and frosting. Overall, I rated the Frosted Animal Cookie Blizzard a 6.5/10.

Staying on the childhood memory path, next came the Girl Scout Thin Mint Blizzard. Making it to the junior ranking of Girl Scouts, I can argue I have made my mark in the cookie selling business. Although Thin Mints aren’t my favorite Girl Scout cookie, I had high hopes for this blizzard.

Meeting my expectation, this Blizzard was a chef’s kiss. Made with both Thin Mint cookies and a pump of the “Cool Mint” flavoring, the light mint flavor and chocolate combined perfectly. I wished the cookie chunks were a little bit larger because near the end the Blizzard they became soggy. The chocolate on Thin Mint is a tad waxy and that texture maintained/almost got worse in the cold, vanilla soft serve. This Blizzard earned a whopping 7.5/10.

To conclude my Blizzard taste-testing extravaganza, I tried the Nestle Drumstick Blizzard. Nestle Drumsticks have always been in my freezer growing up, they are my dad’s favorite so I am very familiar with the taste.

Almost identical to the real thing, this Blizzard wowed me. Using chopped peanuts, vanilla soft serve, and crushed chocolate waffle cone, Dairy Queen mirrored the taste of the classic Drumstick. The balance between the sweet and the salty was spot on and purely addictive. Sadly, the toppings only seemed to make their way to the upper half of the Blizzard so I did not experience pure perfection throughout the entire Blizzard. Deemed as the winner out of the three, this Blizzard received a 9.5/10.

Coming out with new blizzards each month, Dairy Queen will continue to achieve success. If overly sweet birthday cake is your move, definitely go with the Frosted Animal Cookie Blizzard. But, if you prefer the classic mint chocolate combination the Girl Scout Thin Mint Blizzard will not let you down. Ultimately, if you crave the perfect mix of chocolate, peanuts, and crunchy waffle cone, the Nestle Drumstick Blizzard will blow you away.

With three more of the 2021 official summer Blizzards left to try, I cannot declare an official winner just yet. But, so far in the bracket, the Nestle Drumstick Blizzard moves onto the next round against the fierce Cotton Candy, Raspberry Fudge Bliss, and Brownie Batter Blizzard.

Will it’s perfect ratio of salt and sweet even compete with the rest? Until the next Blizzard!