CODA: The Next Big Feel-Good Movie 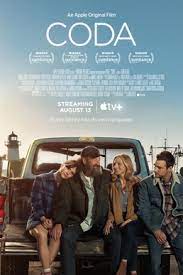 After two years of a pandemic and rough times for people around the world, it feels good for a feel-good movie to win Best Picture at the Academy Awards.

CODA, written and directed by Sian Heder, is a heartwarming and excellent film that took home the highest award in the movie industry. Its win also marks the first win by a streaming platform with Apple TV+ producing the film.

The movie is based on the French film, La Famille Belier, and follows Ruby Rossi, a high school senior who is the daughter of two deaf parents. CODA actually stands for “Child of Deaf Adults,” hence the title of the movie. Ruby aspires to sing at Berklee College of Music, however she struggles with the need to stay and help her family’s fishing business as she is the only hearing person in her household.

CODA’s win at the Oscars was a shock to most as the movie is more light and simple compared to previous winners. However, the film’s simplicity is what makes it a good movie. Most Oscar movies are dense and have more complex themes, whereas CODA focuses more on family and chasing your dreams, things that appeal more to a general audience.

CODA has been praised by critics and audiences alike for its plot, acting, and more importantly its portrayal of deaf characters. Jeannette Catsoulis of The New York Times writes, “Weighed down by a groaningly predictable plot…’CODA’ relishes the opportunity to showcase the expressiveness of sign language.”

CODA emphasizes that, despite being deaf, the Rossi family lives a pretty normal life.

Vice-chair of nonprofit RespectAbility, Delbert Whetter elaborates, “After seeing so many stories where people with disabilities are depicted as helpless, forlorn souls needing to be rescued, it is so refreshing to see a story with deaf characters…[that have] depth and nuance that rival and even exceed that of their hearing counterparts in the story.”

Troy Kotsur’s (who plays Ruby’s dad, Frank) performance was one that definitely stood out. His acting gained him an Oscar for Best Supporting Actor. There is one particular scene that really solidifies his win where Ruby allows Frank to “hear” by putting his hands on her throat while Ruby sings.

Obviously the film’s use of sound is very profound and a highlight of the movie. At certain moments where the surround sound of the scene is loud (notably when Ruby is singing), the film switches to the Rossis’ point of view where sound is extremely dimmed to the point where the audience is deaf too.

Sticking true to the light-heartedness of the film, the visuals of the film are very light. The film is pretty bright, you definitely won’t have a hard time seeing the simple scenery of Gloucester, Massachusetts. The visuals, like the overall movie, allow the viewer to enjoy the beauty in simplicity.

The only setback for this movie would probably be the predictability of plot. Even just by hearing the synopsis of CODA, you can probably figure out how the story will go. Although, that doesn’t mean the plot isn’t enjoyable because a movie doesn’t need suspense or a plot twist to be a good movie.

While the film is very predictable, CODA overall has very meaningful themes about family, responsibility, and the treatment of the disabled. The film’s win proves that Best Picture winners do not need to be dark, gritty, or incredibly nuanced. Movies can be good and award-winning if it has heart, and CODA definitely does.