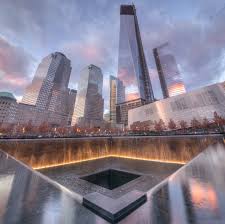 A picture of the beautiful 9/11 memorial in New York. America needs to do more to honor the events of 9/11.

Just last Wednesday, the eighteenth anniversary of one of the most devastating events in American history passed.

When thinking back over the years, there is one thing that I think we can all agree on; the horrible events of 9/11 are slowly, but surely, being forgotten.  Take the announcements last week, for example. Nowhere in our examen or our announcements did we even mention that it was the anniversary of 9/11. If you were to have checked out what the websites of popular newspapers had to say about 9/11, only a few even had the event on the first page, many just criticizing politicians for how they were remembering those whose lives were lost.

Only when you searched up 9/11 in the search engine could you find all the articles that were made in the remembrance of 9/11, with the exception of the news on the television where they showed the Mayor and many others in Chicago honoring those who risked and lost their lives. Now, as time goes on, it is expected for people to heal and gradually forget about events. However, seeing as terrorist attacks are still happening all around the world, it is time for America to take a stand.

We have to show that we know what it’s like to go through such an awful event and that we are there for the countries who are forced to go through it now. When walking through the school I found several students who were willing to speak on the issue of 9/11.

Libby Downey, senior, said that she wished that she had time to reflect, however this was the first year her schedule was too full. This is probably a large issue within the lives of both teens and adults alike. Everyone’s lives are so full that we simply forget or don’t have the time.  However, this could be fixed if our society began to make it a priority to celebrate the lives of those who died that day.

I also interviewed Frannie Whelan, a junior, who said that she discussed it in a couple of her classes as well as added it to her family’s prayers. This is just one example of where 9/11 isn’t being forgotten. But that doesn’t mean our society as a whole isn’t losing sight of what happened. We need to reinforce the fact that this is an issue that we’re still having today and that America stands by anyone who is having these issues.

The bottom line is, America is forgetting 9/11 and there are several things that need to be done so that we don’t continue to forget.  At Loyola Academy in particular, we need to take a stand.  Next year, a prayer for those who risked and lost their lives should be said.  We should have a prayer service, where the school comes together just to have time where we are focused on nothing except thinking and praying for those who were taken that day.  Even if the prayer service is optional, and only ten minutes long at the beginning or the end of the day, there needs to be something.  America needs to show that we haven’t forgotten the events of 9/11 and it has to start somewhere.

In the end, 9/11 wasn’t just an attack on the Twin Towers; it was an attack on America as a whole and we must remember that.

If you want a picture to show with your comment, go get a gravatar.